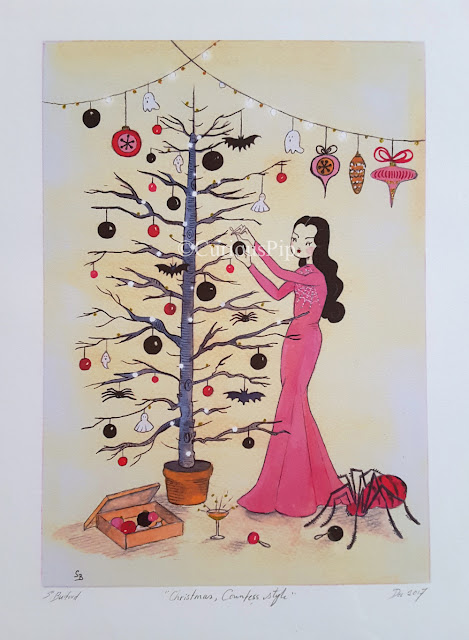 I've been illustrating this slinky glamour ghoul, in her Schiaparelli pink gown, on and off throughout 2017 - she's become quite a pal. I see no reason to forsake her at Christmas, or indeed, as we head into 2018 - she's fast becoming my fashion icon!

She is inspired by all the glamour vamps of the 1930's 40's,50's and 60's so, think, Gale Sondergaard, Maila Nurmi, Carolyn Jones or Carroll Borland, throw in some high glamour from the likes of Elsa Schiaparelli and voila! you have The Countess!

I love her bare bones tree and ghosty tree decorations. This painting is a huge homage to the fabulous American cartoonist and his creation of The Addams Family. His wonderful, macabre illustrations of the Addams Family troupe appeared in The New Yorker regularly from the late 1930's to the mid 1980's. Seriously, do some research they're witty, deadly, but oh so funny.

May I take this opportunity, on this short but sweet little post, to wish my friends and followers who celebrate Christmas to have a wonderful festive time and I look forward to sharing with you my inspirations, work and witterings in 2018.

Flutter, flutter little bat, how I wonder where you're at....

This dazzling handmade Bat Girl has just fluttered into my Shop. Act fast as I have a feeling she won't be lurking for long.

I shall be a rather sad to say goodbye to my little friend. Having spent many hours creating this eye-catching little character I felt in a constant bubble of 1920s costume parties. She has the look of a dazzling flapper about her in her black lace and sparkling sequins. I've not used a machine at all, preferring more and more these days to work free hand. I enjoy the slow, calming sense that hand stitching gives me. If you witness every tiny stitch in a piece, you get much more of a thrill at the end.

Interlude with Bunny and Una.....

It's so nice to be spending time with these girls again. Bunny and Una were such a hit in 2015 that I thought I would re visit them - a little interlude before I start work on my Autumnal ideas.

I created these girls with cute 1930's Busby Berkeley chorines in mind. There is also a whole lot of inspiration from the 1937 movie Stage Door which centres around actresses and dancers in a 1930's theatrical boarding house.


I sold the Bunny and Una dolls a long time ago but it's the prints that are having a rather nice moment back in my Etsy Shop I have re sized the image slightly and reproduced them on different paper to the first run. Each illustration (there were 7 in total but I'm just reproducing these 4 favourites) was created in watercolour and gouache. I chose very muted tones and a limited colour palette, which I think suits the style of the times and gives each piece a very vintage feel. They look so beautiful - like colour plates in a dusty old children's book.

I'm having a lovely time at the moment going through my old sketchbooks and portfolios. It's so good to find little turned down pages of characters that you had in mind but which never quite made it to your work top. I'm gathering ideas for Autumn at present and will be making a start on my ideas and thoughts next week.

Sad to be saying farewell to the characters that filled my Summer, Botanical Percy with her dainty pipe and colourful Carmen in her Tutti Frutti hat. Alas, I am now sketching ideas for a new original Pip character which will keep me company as the new school year starts. I love it when the weather turns chilly and the dark nights creep in  - which, if I haven't told you before is my favourite time of year. As soon as I've had a little Summer trip and the school holidays are drawing to a close I really feel myself start to yearn for that familiar sense of the coming of Autumn - you start to notice the leaves falling and the spiders start their epic web making in your garden.

I shipped out my last Percy doll today and am putting the finishing touches to the last of my pre order Carmens. But If you are still longing for a bit of bohemian, sun soaked, carefree Percy the prints and mini prints are all up in my Etsy shop.

This little character started in 2015 when I was creating a happy little trio of seafarers. She began as a seaside adventurer, writing novellas, drinking hard liquor and carrying on a wild affair with a fiercely handsome fisherman called Xavier - much to the annoyance of a jealous mermaid named Pearl.

Persephone has an edge - which is what I love about her - but she's also very feminine and sensitive. She's very bohemian and I would imagine her house is full of beautiful Persian rugs, trinkets from around the world and of course lots of leafy plants.

Since that crazy whirlwind of a romance two years ago, pipe puffing Persephone (or Percy for short) ran away from her hearts desire (Xavier) and created a haven for herself in her botanical garden and tropical greenhouse where she now writes and paints about butterflies and cactus.

Lots of people and characters have inspired Percy along the way including model and muse Renee Perle  Polish opera singer and garden enthusiast Ganna Walska Surrealist artist Nusch Eluard, and even Eva Green's portrayal as Miss Peregrine in the 2016 movie by Tim Burton.

During the course of the Summer I have created 4 Percy dolls along with a series of illustrations. I will be listing the prints in my shop on August 16th as well as a little series of postcards which will come a little later. There is still one Percy left in the shop and the last one will come mid August. I hope you've fallen for Percy as much as I have, I shall feel very sad to leave her behind but very much hope she'll spring up again next Summer.

Posted by Sarah Burford at 13:06 No comments:

April and May has been consumed with leopard print!

I have absolutely adored spending the last month and a half immersing myself in one of my very  favourite screwball comedies. No matter how many times I watch this charming classic I always laugh.

Made in 1938 "Bringing up Baby" is the epitome of the classic 30's screwball comedy.

A rather shy and goofy palaeontologist (played to perfection by Cary Grant) finds himself in a number of predicaments involving a scatterbrained heiress (Katherine Hepburn) and a leopard named Baby!

This little collection of prints and textile pieces has been created whilst re watching the movie on repeat. It has therefore all been made with a heavy dose of giggling. Hope you like each piece.

The illustrated art prints can be purchased in my Etsy shop as individual prints or as a set of three. 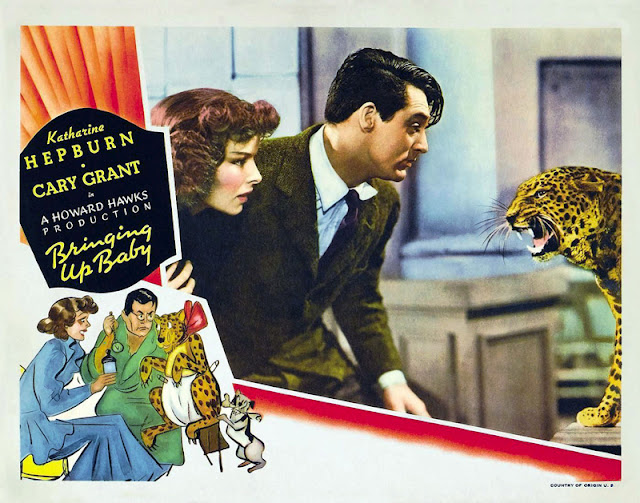 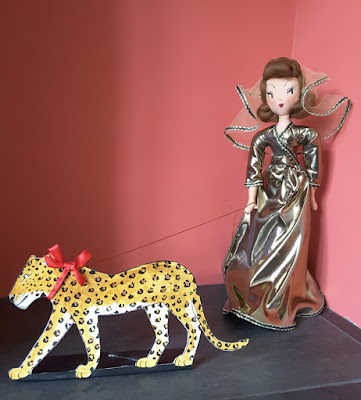 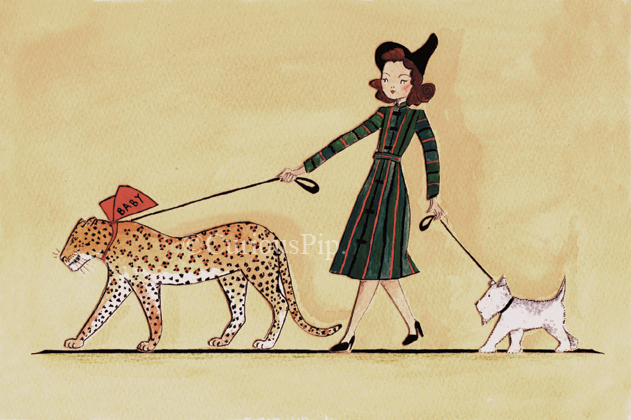 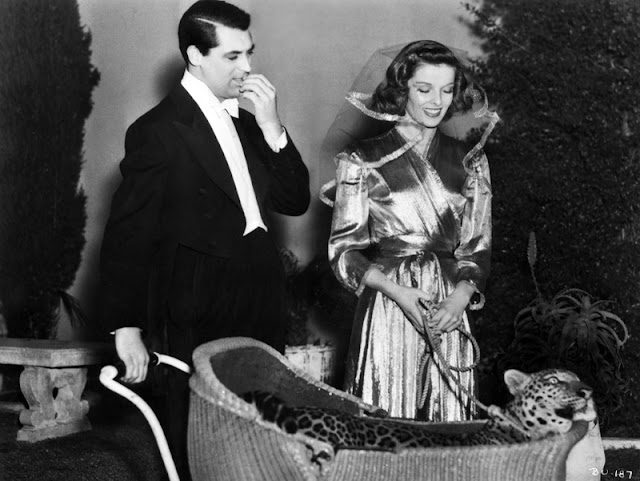 Each of the prints has an added famous caption from the movie..... 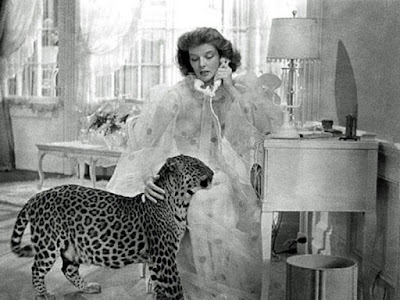 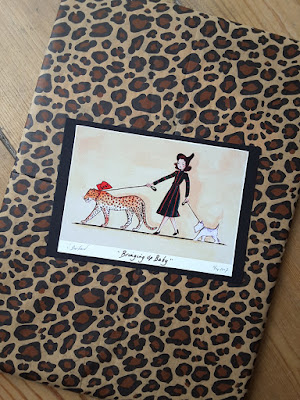 I'm so delighted that people are really enjoying my new print An Illustrated Map of Iceland now listed in my Etsy Shop I was so inspired by my recent long weekend in Reykjavik that I couldn't wait to paint this fun and colourful little map pin pointing a few of the pleasures of this glorious country. We managed to pack a fair bit in during our 3 day trip as we'd researched our trips and restaurants we wanted to eat in before we even got on the plane!

Ever since I was a teenager I've wanted to visit Iceland and now that I've dipped my toe into experiencing it's capital of cool I long to go back, hire a car and drive around the whole country on a 2-3 week trip. I longed to go but now I just long to go back! 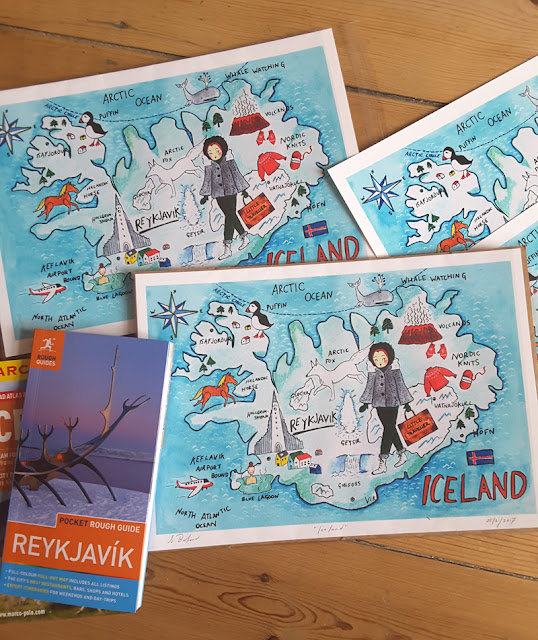